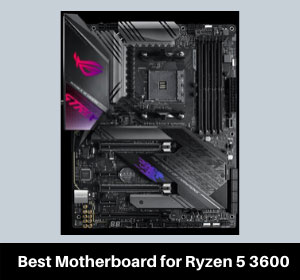 Looking for the Best Motherboard for Ryzen 5 3600?

Among a lot of motherboards from prime series the Asus Prime X570-P is another example of power packed motherboard targeted for the lower end users. The motherboard is designed for 3rd Gen AMD Ryzen 3k series and works exceptionally well with the Ryzen 5 3600. The Asus Prime X570-P has high core counts that provides stable power to the processor and ensures efficient performance.

The best feature about this motherboard is the cooling system which has heat sensors for temperature mapping, active fan control with Fan Xpert 4 or UEFI BIOS. For enhanced connectivity dual M.2, PCI-e Gen 4 and USB 3.2. Unlike other motherboards in the entry level this motherboard offers RGB LED lighting with Asus Aura Sync control. But it does not support NVIDIA SLI, WIFI or Bluetooth.

The Asus AM4 TUF Gaming X570-Plus is another efficient motherboard from Asus that has made quite a reputation in market for its enhanced power solution and military grade TUF components providing strength to the body and more stable performance with the AMD Ryzen 2nd and 3rd Gen processors. It comes with DR. MOS power design for unwavering stability in games.

The best attribute of this motherboard is the cooling features which comprises Active PCH heat-sink, VRM heat-sink, M.2heat-sink, hybrid fan headers that can be controlled with FanXpert 4, altogether providing smooth running through-out . The added feature which you get in this motherboard is the Intel WIFI with 2×2 MU-MIMO support, Bluetooth 5 and Gigabit Ethernet. Moreover it has Realtek S1200A Audio Codec and ASUS Sync RGB Lighting.

The price to performance ratio of the Asus AM4 TUF Gaming X570-Plus is relatively higher than other motherboards under the $190 price tag.

For connectivity it has WIFI, 10 USB ports at the back, and USB Type C at the front and Intel Gigabit Ethernet. For aesthetics RGB Fusion 2.0 LED strips are included in the motherboard. For cooling the system the Smart Fan 5 tech with multiple temperature sensors and enlarged heat-sink design is added to the rig along with 4 fan headers. Moreover the ultra fast PCIe and M.2 slots are fitted with single thermal guard. Altogether the Gigabyte X570 Aorus Elite is well equipped with necessary features for providing smooth performance. For High quality audio experience audio capacitors and noise guard is provided. Though the Gigabyte X570 Aorus Elite has many important features but it lacks the USB Type C port on the rear.

For a motherboard offering 3 years of warranty along with many advanced features just for $200 is not easy to resist. Gigabyte X570 Aorus Elite WIFI is specifically designed to serve the necessity of both regular users as well as low end gamers.

Asus ROG Strix X470-F is a low end motherboard targeted for the normal and average users. Asus ROG Strix series motherboards have maintained their quality from a long time and this model has maintained its quality and offers high level performance in gaming. The X470-F excels in quality and consistency and has a glooming design due to RGB lighting which enhances its outlook manifold outshining the competition. The motherboard is powered by both AMD 2nd and 7th Gen Anthlon   processors.

Key features provided in the ASUS ROG Strix X470-F Gaming are pre-mounted I/O shield, Asus Aura Sync RGB controller along with Philips Hue lighting synchronization, Asus 5 way optimization for one click over clocking and Auto tuning, 8 channel HD audio with Japanese capacitors and SupremeFX technology provides supreme quality audio with low distortion. The cooling system comes with fan headers and controlled by Fan Xpert 4 and dynamic heat-sink. There are not many drawbacks in this motherboard as such other than the absence of WIFI.

For users looking for a low end gaming motherboard under $170, this is an ideal device to serve the purpose. This motherboard is a perfect example of quality and performance packed together with reliability of ASUS ROG series.

From the name itself it is evident that this motherboard is a true performer in every sense. It is powered by AMD Ryzen series and 7th GenA series/ Anthlon processors. This motherboard is very budget friendly and comes within $110 range. User gets memory boost up to 3200 MHz on over-clocking. It also has the feature of attaching multi GPU units with the steel armor PCIe. It also supports 3-way AMD Crossfire.

MSI has definitely maintained the bar of quality and performance even under $110 without compromising much inside the device. Tough WIFI is not provided but that is bit too much to ask for in a limited budget. Moreover the target user can save money and utilize it on other gaming products.

Gigabyte B450 Aorus Pro WiFi is designed for 1st and 2nd Gen Ryzen and Ryzen with Radeon VEGA graphics processors with the idea of an affordable motherboard with more potential. Aorus designers used the AMD StoreMI technology to boost the memory speed reducing the boot time altogether. Dual M.2 thermal guards are really useful in reducing bottlenecks and throttling by dissipating the heat.

There are more than usual features offered in this motherboard in a very affordable price range of $110, they are built-in Dual Band WIFI with Gigabit Ethernet LAN and Bluetooth for faster connectivity, integrated I/O shield, it also has USB 3.1 Gen 2 with USB type C and type A. For cooling the motherboard it is equipped with Smart Fan 5 with Fan stop for better monitoring and controlling the fan headers. It also has RGB Fusion lighting to enhance the aesthetics of the motherboard. For better audio quality Aorus has used the Amp-Up technology with Wima and chemicon audio capacitors that provides immersive sound quality to the users. It also has HDMI/ DVI-D support for multiple screens.

Overall you get reliability, affordability, latest features, what more can anyone ask from a motherboard at such low price.

MSI Arsenal gaming B450 Tomahawk Max has the fastest memory speed compared to the other motherboards in our list. Dynamic core boost with digital layout design is provided in the core for uninterrupted power delivery. The MSI PWM heat-sink works nicely with any kind of processor and gives excellent performance. The enlarged VRM heat-sink also helps in better heat dissipation.

Some other features comprises the steel armor for PCIe that shields the connectors from external damage, the Audio boost tech helps in high quality audio for pin point accuracy in games giving the user an upperhand, Store MI tech, NVMe M.2 support are all included in the motherboard. It also supports 1st, 2nd, 3rd Gen Ryzen processors along with the Ryzen anthlon and Ryzen Radeon Vega graphics processor.

The Tomahawk Max may not have a lot of features in it but it does not weaken its credibility. It is a very reliable motherboard which will definitely satisfy the users expectation.

The Asus ROG Strix B450-F is the latter version of the ROG Strix B470-F, so the features are almost same as they are in the ROG Strix B470-F. We included this motherboard in our list on the basis of its endurance and reliability. Like the latest B470-F it is also powered by the AMD Ryzen 2nd gen and Anthlon processors.

Key features provided in the ASUS ROG Strix X450-F Gaming are pre-mounted I/O shield, Asus Aura Sync RGB controller with 2 additional LED strips , Asus 5 way optimization for one click over clocking and Auto tuning, 8 channel HD audio with Japanese capacitors and SupremeFX technology for HD audio. In the cooling system active fan headers are controlled by Fan Xpert 4 and dynamic heat-sink and dedicated PWM/DC header. The AI suite allows the user to control and monitor the performance of the motherboard.

The B450-F version is a cheaper than the B470-F and targeted for the millions of low end users who want quality at a low price. Although Asus has brought a cheaper version but they didn’t curtail down on the potential and quality of this motherboard.

This motherboard is the only micro ATX board included in our list. The motherboard is powered by 1st and 2nd Gen Ryzen and Ryzen with Radeon VEGA graphics processors. The small form factor does not compromise your connectivity as it has 6 USB 3.1 Gen 1, 2 UEB 3.1 Gen 2 and 6 USB 2.0 ports included. The M.2 slots have thermal guards for preventing bottlenecks and throttling.

This motherboard is equipped with dual BIOS system, so that if one fails or malfunctions the backup BIOS can cover it up. RGB Fusion and Smart Fan 5 with thermal sensors are also helpful for better performance. it also has 8-channel HD audio codec for HD sound.

This motherboard can easily fit in small units and is very cheap costing less than $90. It might be a small motherboard but is a great value for money.

The X570-A Pro motherboard from MSI is designed on the AMD X570 Chipset and is an entry level motherboard. The price ranges under $170. With the launch of Ryzen 3rd Gen in July 2019 there is huge upsurge in demand for Ryzen 5 3600 processors and the motherboards supporting the processor. For those who has relatively old processor this MSI X570-A Pro supports both 2nd and 3rd Gen AMD Ryzen processors.

Although this model has resemblance to the MSI X570 Gaming Plus but lacks significant features like the wireless module and Mystic RGB lighting on the board. There is no NVIDIA SLI support but AMD Crossfirex setup can be used. The features that make a cut are the MSI Lightning Gen 4 M.2, PCI-e 4.0 slots for fast data transfer speed up to 64 Gb/s, the Frozr heat-sink design for better heat dissipation and the Audio Boost tech with Nachimic 3 Software for immersive sound experience. The maximum memory speed it produces is 4400 MHz on overclocking.

Performance wise this MSI X570-A Pro is a gem of a motherboard for Ryzen 5 3600 processor, for best output one can have to update the BIOS and that’s all. This motherboard serves all purposes of an average user.