Guildcafe is supported by readers. When you buy with our links, we may earn a commission. 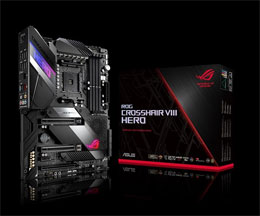 If you are planning or want to build your PC using Ryzen 3700x processor and looking for the ryzen 7 3700x compatible motherboards then this post is for you.

So, if you are looking for the best motherboard for ryzen 7 3700x processor read this guide before buy. Here I have select the top 6 motherboards from Asus. MSI and Gigabyte.

After going through a series of gaming motherboards from Asus I have selected this ROG Crosshair VIII Hero.

This gaming motherboard is the best choice for users planning to have the latest Ryzen 7 3700x processor.

Although the best variant from Asus is the ROG Crosshair VIII Formula but the Crosshair Hero is comparatively cheaper providing almost same features. This board supports 2nd and 3rd gen Ryzen processors.

The 14+2 power supply provides enough voltage for powerful gaming output. For Ryzen 3700x the power consumption is near about 65W.

the motherboard comes with two PCIe M.2 slots for faster connectivity and data transfer. The PCH and dedicated M.2 heatsink work efficiently cooling the system reducing thermal throttling and in addition to it comes with active thermal sensors for heat detection.

Overall the design and the performance are very good. So, if you are looking for the premium board with good performance, great cooling, solid VRM and a lots of features then this board is for you. This mobo has two variants one is on-board wifi and another one does not have on-board wifi. The price difference between these two variants approx $20-$30.

If you are looking for the cheapest X570 motherboard with on-board wifi for 3700x processor then Asus TUF Gaming X570-plus is for you.

It has the standardized cooling system with dedicated M.2 heatsink, VRM heatsink, thermal pad for transfer heat and better cooling which prevents bottleneck or throttling of memory. Heat sensors and multiple fan headers are also provided for efficient cooling of the motherboard.

It is a very cheap motherboard compared to the other motherboards from Asus, especially from the ROG series. This AM4 motherboard is a very decent performer across heavy games. The fan management is also decent keeping the sound just less than 35 dB.

This board has Realtek S1200A audio codec, the unprecedented 108dB signal-to-noise ratio for the stereo line-out and a 103dB SNR for the line-in which will give you great sound quality.

This board has on-board Wifi along with Bluetooth 5.0 for connectivity which is big thumbs up for this low priced motherboard. Moreover, the Realtek L8200A Gigabit Ethernet and TUF LAN guard technology are provided for high-performance.

Altogether this motherboard from Asus competiting to all the low priced motherboards in the market. ASUS AM4 TUF Gaming X570-Plus is really a great motherboard under low price tag with good performance.

Next, I have the Gigabyte X570 Aorus Master. An X570 chipset based gaming motherboard with one of the best cooling features in the market.

This motherboard is designed to withstand heavy workload and intense hours of gaming without any issue. This is mainly due to the cooling array of the motherboard comprising of direct touch heat-pipes, thermal gourds on the PCIe slots, M.2 heat sinks, adjustable fan headers, etc.

Intel Wi-Fi 6 with Aorus Antenna is provided in the motherboard for speedy connectivity along with 2.5G Ethernet.

The audio codec used is ESS Sabre DAC with Realtek ALC1220 codec for intensified surround sound which is only used in Gigabyte X570 Aorus Xtreme and Gigabyte X570 Aorus Master. Rest of motherboards like Aorus pro, Elite have AMP-UP audio with ALC1220-VB.

The Smart Fan 5 system has made cooling easier with hybrid fans for voltage and PMW with noise detection and Fan stop facility. Another notable feature of the motherboard is the use of RGB Fusion Coloring with multi-zone fusion LED light show design increasing the dynamic outlook of the whole setup.

Gigabyte X570 Aorus Pro WiFi is a mid-range gaming motherboard for ryzen 3000 series processors. This motherboard has shown great performance with the new Ryzen 3700x processor and proved it worthy to be in my list.

The features it has might not attract the eyes of hardcore gamer or gaming enthusiasts but definitely catch the eyes of average gamers or newcomers.

It has 12+2 stage VRM power delivery to boost the performance of Ryzen 3000 series processors and take out the very best from them.

The Smart Fan 5 tech is also provided in this motherboard for controlling the adjustable fan headers. Memory stability is excellent and provides the boost of 4200+ MHz.

The BIOS in this motherboard is very stable.

Gigabyte X570 Aorus Pro WiFi comes Intel WIFI 6, Bluetooth 5.0 and standard Intel Gigabit LAN for connectivity, no 2.5G Ethernet is provided in this motherboard like the AORUS Xtreme and Master.

The overall aesthetics of the motherboard is decent and the RGB Fusion lighting makes it more stylish. The Audio codec used is AMP-UP audio with ALC1220-VB which provides decent sound output but not like the ESS Sabre DAC audio.

Altogether this motherboard from Gigabyte is a very good choice for medium gamers and newcomers and with a price under $270, it is a terrific motherboard to have. Not every brand comes up with motherboard for AM4 Ryzen processors like this specially targeted for the mid-range gamers. Gigabyte has definitely done a great job with this board and ensured that the users will have the best gaming experience with their motherboard.

This MSI MPG X570 Gaming Pro Carbon is a stylish motherboard is designed for high performance within an affordable price range. Unlike other motherboards from MSI which comes in two variants (Wifi and Non-Wifi), this motherboard is an exception as it only comes in build WIFI.

MSI has stacked performance and affordable pricing in one and had developed the MSI MPG X570 Gaming PRO Carbon. Although it doesn’t possess the advanced features like MSI GODLIKE or Creation, this motherboard has enough power in its engine to provide supreme gaming experience to the average users.

It has a memory boost of 4200+ MHz with DDR4 RAM. There are Dual PCIe slots with M.2 Shield Frozr for preventing overheating the SSDs resulting in thermal throttling and providing high bandwidth ensuring quality performance. The Frozor heat sink design with double ball bearings with propeller blades keeps the motherboard cool by active heat dissipation.

The 8+4 pin power delivery VRM is provided along with the new MSI Core boost tech which is a premium circuit that provides highly efficient power supply to the processor for heavy performance output. The motherboard provides stable BIOS and over-clocking and there is hardly any noise from the chipset fan.

For connectivity this motherboard comes with Intel WIFI 6 which works just fine along with standard Intel Gigabit LAN.

Another plus point of this motherboard is the Audio Boost 4 with Nachimic 3 software that offers immersive sound experience while gaming. Customizable 29 effects of RGB Lighting is provided to enhance the style which can be controlled by the Mystic light App.

This MSI MPG X570 Gaming Pro Carbon has covered every aspect to be a decent gaming motherboard within $300 price range offering quality performance and precision for those who could not afford the high end motherboard like MSI GODLIKE.

The memory boost recorded while testing is 4333+ MHz. MSI has also provided WIFI 6 and Bluetooth 5.0 in the motherboard in addition to the 2.5G Realtek Ethernet and 1 Intel Gigabit LAN for superfast connectivity.

MSI has equipped 2.5G Ethernet in this model which is available only in MSI GODLIKE, making the MEG ACE a premium category motherboard.

The overclocking and firmware can be easily controlled and monitored by MSI Click BIOS 5.

The cooling system is just same as the MSI MPG X570 Pro Carbon nothing more nothing less. The power delivery is 12+2 which channels enough power supply to produce high performance from the Ryzen 3700X processors.

RGB coloring is quite common feature for MSI motherboards with 16.8 million colors and 29 effects to choose from adding more beauty to the aesthetics.

The Audio codec used is Audio Boost HD with ESS DAC for the immersive sound experience which is better than the Audio Boost 4 used in MSI Carbon, Edge, Gaming plus.

The only thing missing in this MSI MEG ACE is the HDMI port which is provided is most motherboards in the price range of $370.

Overall this motherboard is somewhat a hybrid of mid range and high-end motherboards from MSI and a very decent performer across different games. This motherboard can be a tough competition for motherboards like ASUS Crosshair VIII Hero and Gigabyte Aorus.

Before buying a motherboard make sure the features you need are present in the motherboard and your other peripherals are compatible with the new motherboard that’s all. These are the best motherboard for ryzen 7 3700x in my opinion based on performance, price, and features.

Hi, I am Sunil a Tech enthusiast, PC builder, and Gamer. I have been building PC since 2012. At Guildcafe, I review various products such as Motherboards, CPUs, Graphics Cards, Laptops, etc.