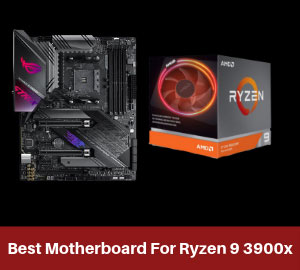 There is no doubt that Ryzen 3900x exceeded every processor that is available in the price at its price. It is a high-end processor which will amaze its users by its performance and is the direct competitor of Intel’s Core i9 9900k and i9 9900KS. I have reviewed the best motherboard for i9 9900k.

The processor comes with 12 core and it has an excellent clock speed though it is also a power-efficient processor only needs 105 watts of TDP.

For this outstanding processor, you need an excellent motherboard. There are some motherboards I have enlisted below, read about these motherboards carefully and choose the right one for yourself.

Among the motherboards that are best known for gaming, ASUS ROG STRIX X 570-E Gaming is the one. It will give you no doubt a mind-blowing performance. This motherboard is a mid-range product so if you are looking for a motherboard having great performance at a lower price then this one will amaze you.

The motherboard comes with eight SATA ports which are really an amazing feature. Another noteworthy thing is that ASUS provides with this motherboard eight USB3 Gen2 ports. Gen 1 ports are not suitable for this type of chipset so ASUS make an effort to provide you eight Gen 2 ports which are a significant change.

As it is a gaming motherboard so Asus engineers use in this motherboard Realtek RTL8125G 2.5 GB NIC. The motherboard also comes with Intel I211-AT GB NIC which acts as a secondary port control.

In every gaming motherboard, there is a need for the cooling facility and for better gaming experience Asus provides with this motherboard two M.2 cooling heatsinks. Those heatsinks are located both at the top and bottom part of the PCIe slots.

ROG STRIX X570-E is not only made for gaming but in the case of overclocking it also gain some popularity. In this motherboard, we can see sixteen chokes that are to a 50A MOSFET that means you can overclock up to 600A of current to the CPU core.

After discussing all this now we are going to discuss about RGB. There are two RGB and two ARGB headers, placed at the top and bottom of the motherboard and that could be used for controlling fan lighting. USB connectivity is another fantastic feature that takes this motherboard into another level.

This motherboard offers us total 8 Type A and Type C USB 3.1 slots which located at the rear panel. To satisfy the customer’s interest ASUS includes the SupremeFX audio codec 1220 HD which is a praiseworthy audio facility. Besides the motherboard ASUS provides you many more things in the box e.g, a multi-language user manual, driver and application disc, RGB  and ARGB extension cable, four SATA cables, a thermistor lead, a 2T2R Wi-Fi antenna and many more things.

There are so many motherboards available in the market that runs on X570 platform but ASUS Crosshair series has long been there in the market and gain some popularity among the customers and today we are going to discuss the latest motherboard in this and it is ASUS ROG X570 CROSSHAIR VIII HERO(Wi-Fi). This is another high-end motherboard by ASUS and it has tons of features in it which give you everything you are looking for. This motherboard is amazing as it equipped with so many features.

This motherboard equipped with PCIe 4.0, USB 3.2 Gen 2 and 2.5 Gbps Ethernet so you need not be worried about the connectivity. Moreover, with the all-new Wi-Fi 6, it works like a beast. ASUS has always made awesome looking VRM and this time is also not an exception. It is not only good looking but it also works well too.

The VRM heatsinks cover the board so well that you should not worry about the voltage or workload you put on the motherboard its performance will never deteriorate. With the Corsair Force MP600 NVME Gen4 PCIe x4 NVMe controller you can enjoy extreme reading and writing speed. Another plus point of this motherboard is it delivers high fidelity audio with the help of ROG SupremeFX S1220 codec and ESS ES9023P DAC which may amaze the users.

It is well known to all that ASUS has invested a lot into ASUS AURA Sync but the bad news is ASUS has not featured AURA Sync in this motherboard so the lighting is limited to the I/O shroud and the ROG emblem on the PCH heatsink. Though the I/O shroud is not an unworthy upgrade it is better than regular RGB lights.

Gigabyte is well known in the market for its high end but cheap motherboards that’s why it always able to catch the customer’s attention. Though Aorus Master is a high-end motherboard Gigabyte launches it at a reasonable price.

The motherboard has high-end features such as three PCIe 4.0 M.2 slots, 2.5 GBPS Ethernet LAN facility and Wi-Fi 6 802.11ax wireless interface. The motherboard has 12+2 phase VRM which remain under heatsinks. The heatsink of Aorus Master is somewhat better than the other motherboards it comes with copper pipe and aluminum fins for reducing heating problems.

The motherboard also comes with two 8 pins 12 V ATX CPU power inputs so it is a good choice for the overclockers. The RGB LEDs are located off the outer edges of the rear panel which enhance the motherboard’s beauty.

If you are a gamer or a music lover then you must need a quality sound for your computer then this motherboard will satisfy your interest as the audio of the board is controlled by a Realtek ALC1220-VB HD audio codec and an ESS Sabre 9118 DAC chip which give you an extraordinary feeling.

The board has a black PCB, black IO cover, black heatsinks, the PCIe slots and DIMM slots are metallic which Gigabyte calls PCIe Armor.

If we talk about the features, there are two DDR4 memory slots which support up to 64 GB. The motherboard has 12+2phase VRM which is controlled by an Infineon IR35201 8phase controller which delivers power in 6+2 form.

Gigabyte launched this motherboard by featuring it with full PCIe 4.0 design, such as PCIe 4.0 slots, PCIe 4.0 M.2 connectors which enable the motherboard to perform well and this specification will no doubt attracts the gamers and overclockers.

The board also offers a single Intel I211 AT Gigabit LAN and  Intel Wi-Fi 6 so you do not have to worry about connectivity. Every Aorus Motherboards offer RGB Fusion 2.0 which much better than the LEDs. The RGB Fusion enables the users to control the internal and external RGB light of their PC.

Gigabyte uses in the board a Realtek ALC 1220 VB HD audio codec for those who love music and gaming where a sound is an essential object. In the Aorus PRO Wi-Fi, we also found many ports a single USB 3.1 Gen2 Type-A and Type-C ports and the rest are USB 3.1 Gen1 Type-A ports.

MSI is known in the market for their high end and expensive motherboards but this motherboard is a budget-friendly motherboard where you can find some praiseworthy features.

The motherboard comes with an 8+4 pin CPU power connector and a CMOS button is also seen on the I/O panel. Moreover, the PCIe 4.0 M.2 slots have their own M.2 heatsink and the Frozr chipset heatsink includes a fan, the heatsink and the chipset fan are huge so and provide enough cooling all the time so it can be a useful product for the gamers and overclockers.

MSI also includes six SATA ports in this motherboard which are seen below the heatsinks. There are four Ram slots available in the motherboard and it supports up to 128 GB of capacity.

MSI uses Intel AX200802.11ax Wi-Fi adapter which gives you maximum 2.5 Gbps of speed and an Intel I211-AT LAN controller. This is not the end MSI also provides with this motherboard Wi-Fi 6 802.11ax wireless interface which is really an amazing matter.

For the gamers, the onboard sound is a very important feature so MSI includes in this motherboard Realtek RTL8125 2.5 Gigabit NIC. The company provides with the motherboard their unique RGB lights which have many effects and you will control it in a single click. All these features will surely attract the attention of the buyers.

There are so many motherboard manufacturing company in the market but the motherboards that ASRock offers are well known for their look. The ASRock X570 TAICHI is not only an excellent looking mobo but its performance is also satisfying.

The motherboard has four memory slots and supports DDR4-4666 and the maximum capacity of 128 GB. We can see in the board a 14 phase power set up with an 8 v + 4 v power delivery which enables the motherboard users to overclock the motherboard frequently.

The VRM heatsink is of the motherboard is very huge and ASRock offers these type of heatsink as the board has an impressive overclocking facility. There is a full length of PCIe 4.0 slots with two PCIe 4.0 x 1 slot and there is three PCIe 4.0 M.2 slot present below the heatsink.

For the better internet connectivity, the company include a single Intel I221-AT Gigabit port and Wi-Fi 6 wireless adapter. All these features made ASRock X570 Taichi a value for money product.

In the above section, we have discussed some motherboards for Ryzen 9 3900x. There is also a large variety of motherboard available in the market so your choice may differ. But before investing your valuable money check the specification of the motherboard well which you have chosen for building your PC.